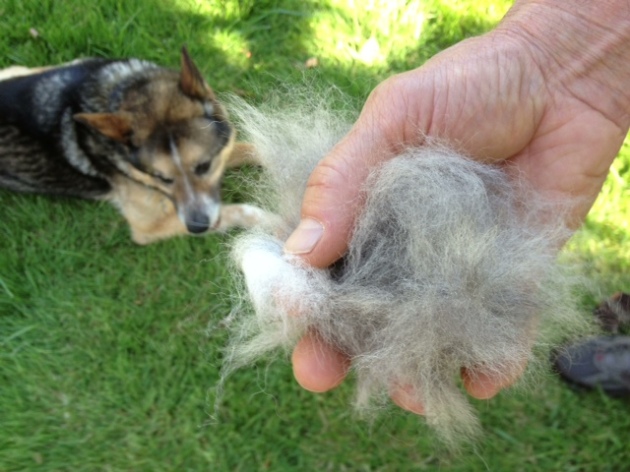 My wife and I plucked this handful of hair in about 15 seconds from Tucker’s left rear leg: A “Tuck pluck.” Don’t let his laid-back demeanor or handsome mug fool you: He’s a shedding maniac, a four-legged furball. He scoffs at combs, brushes and Furminators. He weighs in at about fifty pounds and masquerades as mostly a Norwegian elk-hound mix, but sometimes I wonder if a tiny Chihuahua lurks underneath all his soon-to-be-shed-on-our-carpet coat. Of course, he grows new hair as fast as he sheds the old. Tucker’s like my second novel, Trout Run. He’s in the middle of shedding season, and TR is in the middle of “shedding” words; he’s growing new hair, and TR is growing new images, characters and such. After all is said and done, will TR turn out to be an elk-hound or a Chihuahua?

Update: Tucker has ascended to doggie heaven after spending nearly 14 damned-good years here on Mother Earth. Someday, I’ll spread his ashes in the McKenzie River, where he used to love fetching sticks. I miss him still.